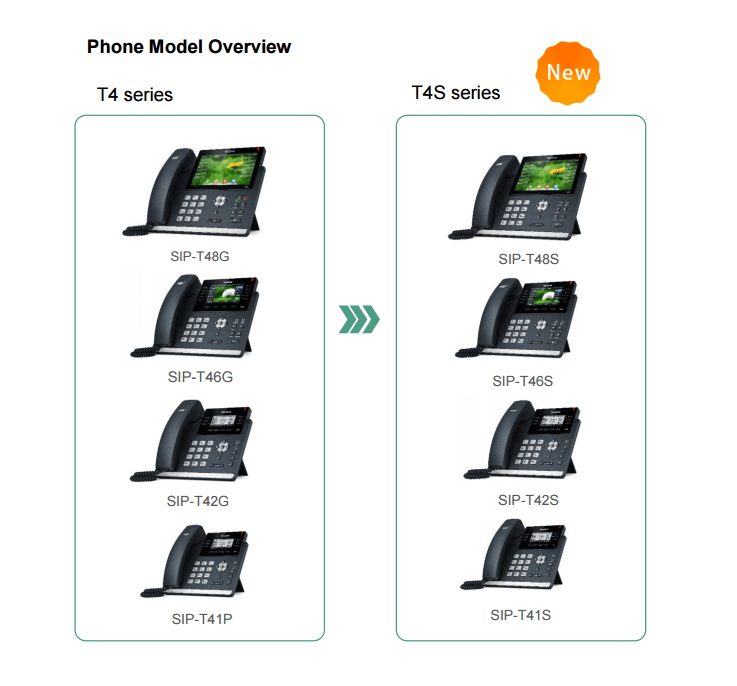 Today, Yealink a leading manufacturer of VoIP Phones and Unified Communications equipment released the T4S Series of IP Phones, which are the enhanced version of the previous T4G/P models.

As you can see from the image below, the T4S Series have the same elegant look you’ve come to know and love. However, the hardware in the phone has been enhanced to handle faster response on the phone’s user interface and also to support future firmware upgrades. This way as Yealink continues to add more features to the phone’s firmware, the T4S Series is equipped to handle them.

The T4S Series share the same V81 firmware across all models so that managing and provisioning the phones is easier and convenient.

In addition, and a feature that many were asking for, the new T4S Series have Opus Support, a popular High Definition (HD) audio codec that is well known and highly used in the Carrier/ITSP market. With Opus, the T4S Series is a competitive phone that features high-end speech quality.

But that is not all, the T4S also have the advantage of being Hearing Aid (HAC) Compatible. The handset makes it easy for a person who suffers from hearing loss to hear more clearly. And for users who prefer to use the speakerphone, the speaker components have been enhanced to optimize acoustic performance over the speakerphone.

Unlike its predecessors, the new T41S and T42S have a USB port for added extension capabilities such as a Wi-Fi dongle (WF40) or a USB headset. Both of these models also feature Bluetooth connectivity through the Yealink BT40 dongle so that users can pair with a Bluetooth headset or smartphone in order to synchronize calling, contacts and call history.  The T4S Series is compatible with the same accessories used with the T4 G/P models. The YHS32 Headset, the EHS36 Electronic Hookswitch, the BT40 Bluetooth dongle, the WF40 Wi-Fi dongle, and the same power adapters and wall mounts (corresponding to like models) can be used.

The best part of this new release is that the T4S models boast tons of enhancements, but at no extra cost since they have the same price point as the old T4 series.

Although the T4S models are coming in hot, the previous versions are still available with no EOL (End of Life) plan in view. If the old models do become EOL’d, don’t worry, Yealink will continue to offer service, firmware upgrades and additional features for the T4G/P Series.

This website uses cookies to improve your experience while you navigate through the website. Out of these, the cookies that are categorized as necessary are stored on your browser as they are essential for the working of basic functionalities of the website. We also use third-party cookies that help us analyze and understand how you use this website. These cookies will be stored in your browser only with your consent. You also have the option to opt-out of these cookies. But opting out of some of these cookies may affect your browsing experience.
Necessary Always Enabled

Any cookies that may not be particularly necessary for the website to function and is used specifically to collect user personal data via analytics, ads, other embedded contents are termed as non-necessary cookies. It is mandatory to procure user consent prior to running these cookies on your website.